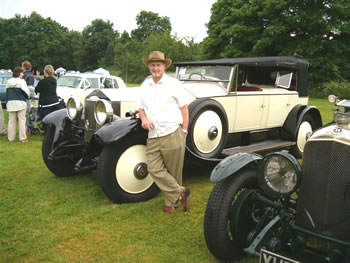 Since 1967 the proprietor has been involved in the hire of classic Rolls Royce motor cars for many uses; weddings, films, music videos, promotions and tours both in the United Kingdom, the United States and on the Continent.

In the 1980's Clive Ellis under the firm name "Vintage Rolls Royce Hire" was performing approximately 250 weddings a year.

Our policies are totally professional in every respect. We are very serious about the jobs we do and have acquired a reputation in this industry which is second to none.

Our aim is to provide a proficient service in an adroit manner with quality Rolls Royce cars that are "simply the best available".

Clive Ellis has supplied cars for a number of films, just to name a few: